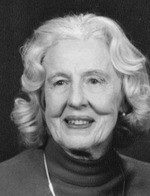 In Memory of
Margaret M
Pohl (Smyth)
1921 - 2020
Click above to light a memorial candle.
Memorial Candle Tribute From
Townley & Wheeler Funeral Home
"We are honored to provide this Book of Memories to the family."
View full message >>>
Send Flowers
Menu

Dateline: Schenectady, NY
Margaret M. Pohl, 98, passed away on September 21, 2020 at home. She was born in Amsterdam, NY to Samuel and Margaret (Michael) Smyth and moved with her family to Schenectady and then Scotia.
Margaret’s Scottish-American parents instilled in their children a love of traditional poetry, music, and the outdoors. Her brothers included her in their many activities— from gymnastics to a home photography lab. A keen student, Margaret, started work at the General Electric Co. (GE) in Schenectady after graduating from Scotia-Glenville High School and with her first paycheck bought a volume of poetry.
While at GE, she continued studies at Union College and RPI and became a technician, exploring the properties of metal mixtures. She continued similar work at the Battelle Institute while a student at Ohio State University. During WWII, she returned to Schenectady where she supervised photo-microscopy and other analyses of rare metals such as tungsten and uranium at GE, including war-time work for the Manhattan Project, and at the Knolls Atomic Power lab.
Margaret (“Mickey”) enjoyed dancing, hiking, and water- and snow-sports. She was an early member of Glenville’s Ski Venture and the Y’s “OYKs” outing/social club. In the 40’s, Schenectady attracted a wave of young people as GE led world-changing advances. Among them was electrical engineer Raymond V. Pohl of Vernon, NY. Ray and Mickey became acquainted on an OYKs canoe trip and charted their course together with a 1948 wedding in Schenectady followed by an Oswegatchie River wilderness canoe trip.
Margaret left GE to raise three children with Ray, sharing with them a love for music and the outdoors. She animated their life with stories and sewed beautiful clothing for them. Her parents, brothers, and nieces lived nearby, the families sharing campfires, milestones, and holidays warmed with her harmonica and harmonies. Mickey and Ray attended Civic Players and square dances and met each month with dear friends to play bridge. As a young mother, Margaret was also active with civics, scouting, and community theatre. She volunteered for the Red Cross, registered voters, and produced the League of Women Voters Bulletin and “Facts for Voters.”
Margaret and her family attended State Street and Trinity Presbyterian and then Scotia Methodist Churches, where she sang in the choir and shared fellowship and service with the women’s and study groups. Her lively drawing of its stained-glass window graced bulletins and mugs.
Margaret was active with the Adirondack Mountain Club, Hickory Hill, and later, Windham’s senior ski program. She enjoyed outings with long-time hiking, skiing, and bicycling companions and as a Ski Writers Association photographer traveled to ski areas across the U.S. A member of the Glen Oaks Garden Club and Schenectady Photographic Society, she grew a spectacular row of peonies and shared her love of nature and photography through community slide presentations.
With her husband Ray, she sang and played at Picking & Singing Gathering events, traveled to folk festivals, attended Elderhostel programs, and toured the western National Parks and Europe with friends. While caring for Ray in later years she entertained area seniors with playful solos as part of the Glenville Senior Center chorus, the GrayAirs.
Gifted with sparkle and a sense of fun, she continued to enjoy the backyard birds and familiar surroundings of her home though her last years, thanks to her daughter Nancy and other family. Margaret appreciated her devoted caregivers Dana and Arite, as well as Barbara, Carol, Colleen and Yogi, and the caring support of nurses Alexis, Danielle and Chi.
She is remembered with love by her daughters Nancy (Jean Robert) Karm and Catherine (Richard Carstensen) Pohl, and son Eric (Diane Tryneski) Pohl; nieces Carol (Andy) Carey, Susan Smith, Lindsay Bibus; and nephews Stephen and Dana (Christel) Pohl. Margaret was predeceased by her beloved husband Raymond Pohl, brothers Stewart Smyth and Thomas Smith, and sister-in-law Alice Smith.
Donations may be made in Margaret’s memory to the America Red Cross of Northeastern NY, 33 Everett Rd. Albany, NY 12205, the Adirondack Mountain Club (ADK) at 814 Groggins Rd, Lake George, NY 12845 or another organization of your choice.